According to the article Rihanna permitted Brown to film the ‘wild’ tape but, following a reported break in their relationship, is now concerned the tape may find its way online.

A source told the magazine; "Rihanna has no issues with her sexuality. But she'd be mortified if her friends and family found this out."

If the rumoured tape does surface it will surely comes as another blow to the Barbados Beauty who is reportedly still in a fragile state following Brown’s alleged assault on her in February.

Brown is due back in court to face charges over the incident on April 6th.
Alycat

The "Umbrella" singer was allegedly assaulted by Brown in a fight last month, but after a brief split, the couple reconciled.

Talk show titan Winfrey urged Rihanna to take a break from her romance, and now it looks as if her words have hit home for the singer, who is spending a little quality time alone in New York, while Brown works on a new album in Los Angeles.

A source tells German Web site Bild.com,"Chris and Rihanna are on opposite coasts right now. They are taking a break."

Brown faces almost five years behind bars if he's convicted of assaulting Rihanna. He's due in court for his arraignment in Los Angeles next month.
KEY9481 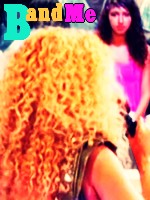 Internet rumors have been circulating that Jennifer Hudson is pregnant. While her manager and publicist deny the rumors, two sources close to the Oscar and Grammy winner confirm exclusively to ESSENCE.com that she is indeed expecting. This would be the first child for Hudson.

Hudson, who is currently receiving rave reviews while on tour with Robin Thicke, is engaged to David Otunga, a Harvard Law graduate and former contestant on "I Love New York 2." The couple plans to marry sometime soon, but hasn't confirmed a wedding date.

Tragedy struck the singer last October when her mother, brother and nephew were murdered. Hudson made a triumphant return to the spotlight on February 1 when she sang "The Star-Spangled Banner" at the Super Bowl. She went on to win her first Grammy Award for best R&B album on February 8.

Hudson is on tour through May 8. Her next show is April 23 at the Fox Theatre in St. Louis, Missouri.